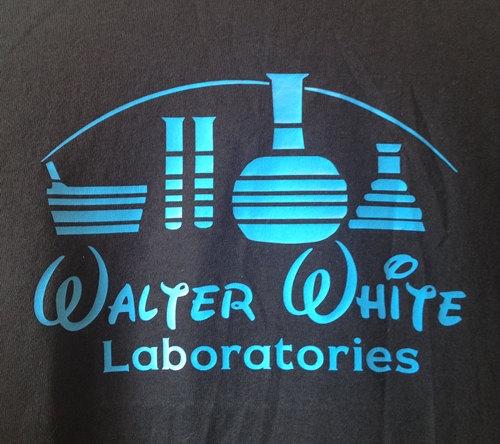 Walt Disney he is not. We're talking about freakin' Heisenberg here, the man who can make the purest stuff on the planet.
One of the most intruiging characters ever, Bryan Cranston did an amazing job playing Walter White. One of those characters we are so conflicted about, one who as we watch we cringe because of what he's doing.
It's sad it got so twisted around, even though he did it all for the love of his family. Men have that need to provide and he did that... of course at the same time making his family less safe. Along the way he realized that he LIKED being in control of everything. He LIKED being Hesienberg, being in control of everything, being a badass and being the smart mofo that stays a step ahead of everyone.
Everything he could be in his career, in his previous life, he could be as Heisenberg.
But we digress... fans of Breaking Bad know all this stuff.
The short of it is, this is simple a fun shirt that plays on the Walt Disney/Walter White connection. Or really the fact that there is no connection there - the two could not be more dissimilar. Yet the design is ever so cute! :)
$15.00
Via etsy.com
Tags: breaking bad, walter white, t-shirt, walk disney, bryan cranston
Categories: Geeky, Pop Culture, Wearable