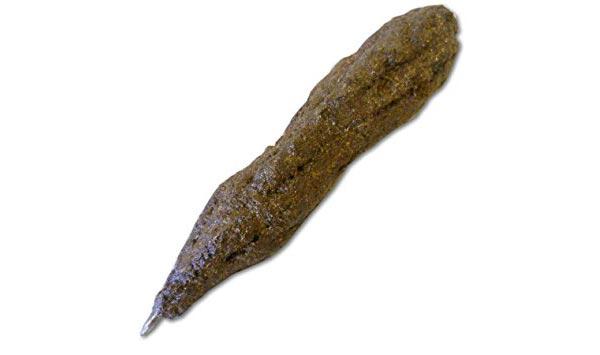 This pen is a piece of shit. :p Ok, not REALLY, but it sure looks like it.

If you look closely of course, you'll quickly see it's not poop at all, but from a distance it can make people question it.

Toss it on a co-workers desk or gift it to a friend. Kids will love it too! Or use it as a cheap little stocking stuffer.

Will teachers approve of this at school? Well, we don't know but it's probably on a case-by-case basis. The kids could just tell teachers it's a #2 pen. :p

Kids could even chew on it to gross other people out. Gah!  We're not put off by much but the thought of someone chewing on a poop-looking pen is a little bit gross.

This pen comes with black ink and writes *ok*, at least for a while. It's not really meant to be a great pen though, it's more about the fun factor (and perhaps gross-out factor...).

Note that this pen does NOT smell! At least it doesn't smell like real thing, thankfully. :)  But buy this or don't, just be warned that it's a piece of crap.