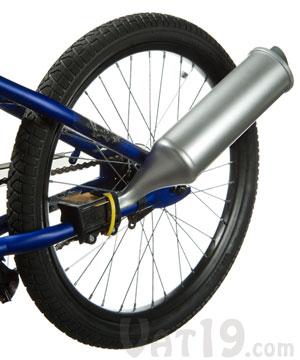 Aw yeah! Remember the days of taping playing cards to your bike to make it sound like a motorcycle? Well TurboSpoke is the PRO version for both big and little kids. It gives an even louder sound and doesn't wear out after a while like cards did.

Make your bike sound like a dirt bike or motorcycle! It has 3 different "Motocards" that are included, each giving a different sound including Dirt Bike (blue), a muscle bike (red), and yellow which is in between those two sounds.  They're very durable and waterproof cards that'll last a long time.

The exhaust pipe magnifies the sounds from the TurboSpoke.

Of course the TurboSpoke doesn't need batteries. And the faster you go the louder it gets!  It fits on most bikes (95% of them) and installs in under 5 minutes.