Rigby Hat From The Regular Show 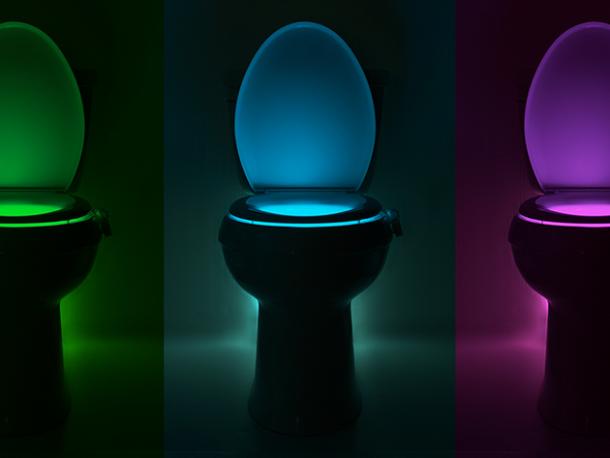 A nightlight for your toilet! No more stumbling around in the dark or peeing on the floor (not that you do that, guys, we're just saying is all...)

It's motion activated and you can pick from a bunch of different colors. Colors include Blue, Red, Green, Aqua, Purple, Yellow, or White --- or you can set it to rotate between all the colors.

You do need 3 AAA to power this little device, but they last quite a while. It's also light-sensitive so it won't come on when the light is on in the bathroom.

Another thought is that it's pretty neat for potty training. Those little tykes might just find this a lot of fun and look forward to going to the bathroom.

Installation is super easy - you simply hang the device over the side of the bowel. The guts of the unit are on the outside of the toilet bowl and the LED is on the inside.

Ok, we typically write up a lot of bullshit text that we hope is at least a little bit entertaining. But we shit you not that this thing is the bomb. We bought one immediately after seeing it and it's pretty damn neat.

As usual, look at the reviews on Amazon. Amazon has many different sellers selling this product (or at least similar products) so you can pick from a few. The one we got works great, and it's the one we listed - however some people have said that they had issues with it. That said, you probably won't have any problems and things will go just fine.

Lastly, if you're afraid of snakes in the toilet, especially in the middle of the night - worry no longer!