Bean Bag Chair That Converts To A Bed

I Would Cuddle You So Hard T-Shirt 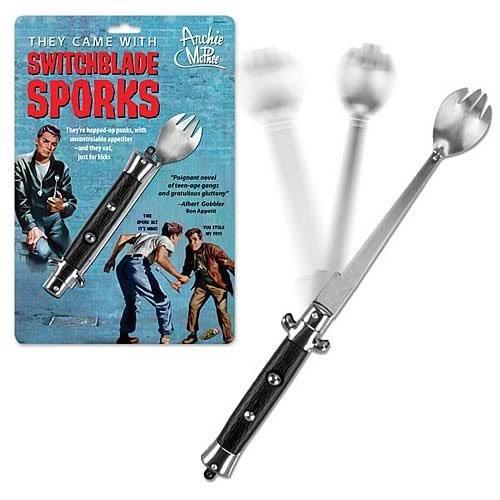 Just like in the 50s, in the days of the greasers, you can whip out your switchblade and ... slurp up some soup. Actually a pretty handy tool to throw in a backpack or bugout bag.
A switchblade spork might be illegal in some states - we're not entirely sure. More and more laws are being passed these days so who knows. We know one thing - we wouldn't advise taking it on board a plane as a carry-on item. Yeah, it's totally harmless, but the TSA doesn't know that. They might view you as highly suspicious, and you'd defend yourself saying, "Hey man, it's just a spork, look!" And you'd whip it out and hit the button to show them and they'd tase you. You'd wake up hours later, dazed and in a dingy cell with a big burly bearded biker looking dude named Butch. He'd ask what you're in for and you'd reply meekly, "A spork...". To which Petey would reply, "Oh one of those switchblade sporks!?  That's what they found on me too!" And you'd forge a relationship that lasted for decades, with your kids growing up together and Butch always having your back.
So yeah, on second thought, we totally recommend taking a switchblade spork onto an airline!
$7.18
Via amazon.com
Tags: spork, greaser, 50s, slurp up some soup, switchblade
Categories: Food & Drink, Humor, Retro, Self-Defense, Survival, WTF