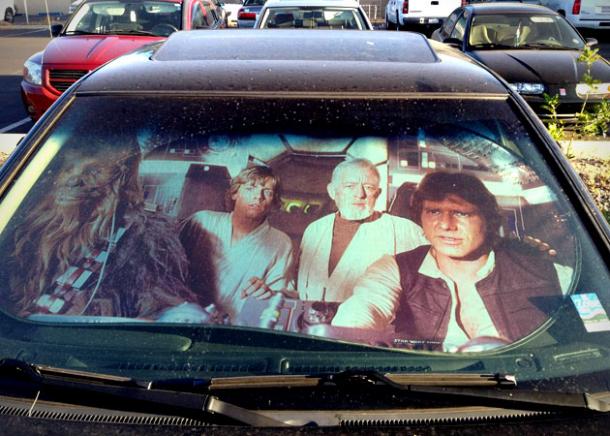 Protect your car from sun and heat in classic Star Wars style! People will double take when they see what appears to be the cockpit of the Millenium Falcon.

(Side note: cockpit sounds like one of the dirtiest words ever, does it not?)

It's one of those things that is immediately recognizable by Star Wars fans across the world. It might even prevent a thief from breaking into your car, provided he's a fan. Then again, he might break in specifically to steal this awesome sun shade. Hrmm...

In any case, the image is of one of the most memorable places in the Star Wars movies. Stuff that went down in the Falcon was some of the best stuff in those movies, was it not!? So much fun was had, so much witty repartee and Empire avoidance going on.

The Force is strong with this one, so go ahead and buy it. The Force will be with you, always. (Ok, we realize that was a cheesy ending to this product write up. Apologies.