A keychain to help find your iPhone and keys!

Sneaker Bag For Washer And Dryer 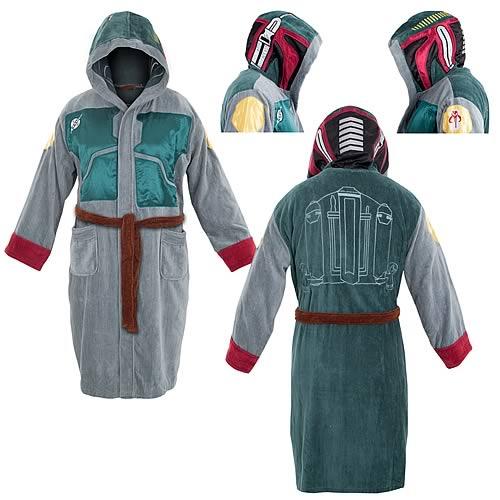 You can be the best bounty hunter in the Galaxy right after stepping out of the shower. If you don't wear robes, well now's the time to start. It has detailed work on the front, back and hood (and really, the hood is the best looking part of this robe.)
And if you don't like Boba Fett, well crikey, what are you doing on a site like The Coolest Stuff Ever? But maybe we can change your mind. See, Boba Fett didn't bitch out on Tattoine in the belly of the Sarlacc as the Ewok Movie (Star Wars Episode VI Return of the Jedi) suggested.
Nope, while George Lucas tried his best to make Boba Fett look like a bitch in the movie, the real story is that Boba was able to finds a way out of the Sarlacc, killing it in the process.
Oh yeah, that's our man.
There's a whole lot more story as well, both in the books and the Clone Wars TV show about Boba Fett. He eventually becomes Mandalore (leader of the Mandalorians) and even worked with the New Republic against the extragalactic threat known as the Yuuzhan Vong. He even crosses paths with the great Han Solo at some point.
Yeah. But so far, this stuff is all just in book form, but you never know. With Disney reviving the franchise and a possible Boba Fett movie on the way, we may see this story (and a whole hell of a lot more) on the big screen.
Until then, well, we have this Boba Fett bath robe.
$69.38
Via amazon.com
Tags: Star Wars, bounty hunter, Boba Fett, mandalore, bath robe
Categories: Geeky, Pop Culture, Wearable