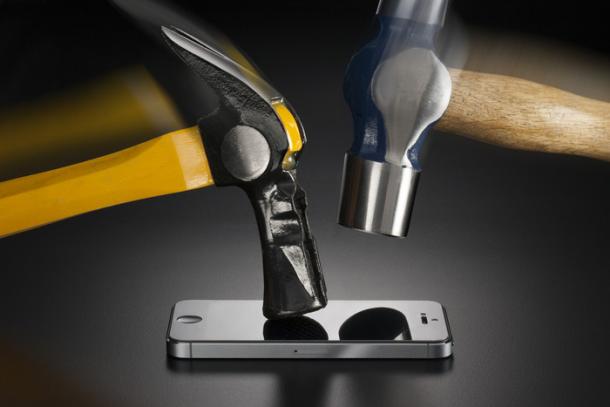 This Kickstarter phone screen protector weighs little and claims to stop all but the most devastating of drops.
Most of us have seen the shattered glass on the front of a phone - whether it's been our phone or a friend's. The solutions are to either take your chances or buy a heavy duty case that adds weight & bulk and dimishes the ability to use your phone well. Plus, such a big case like an Otterbox can obscure the inherent beauty of your iPhone or Android device.
The Rhino Shield is impossibly small and thin for what it claims to do; it's only 0.029 thick. This allows it to fit inside of most cases. Sounds like it'll work great with cases that have an open face.
This plastic phone shield is impact resistant, scratch resistant and resists fingerprint smudge. They say that they've been able to cram several layers together to form one super strong protecting screen.
The video shows them actually hammering on the screen. The screen protector supposedly distributes the shock of the force throughout the entire phone, dimishing the blow. We have our doubts, although the video seems hard to deny. I mean, even if it can protect against scratches, wouldn't the force of a hammer blow possibly fracture some internal part? Couldn't dropping the phone on it's side break some other part of it?
But they show lots of testing (read: dropping) done to different phones and they emerge unscathed. Check out the videos for yourself and decide.
In the long run, most of the Kickstarter backing pledges are pretty cheap, so you're not out much if the claims are overly optimistic. We say go for it! But perhaps use a separate case in conjunction with the Rhino Shield to start with and see how well it works for you.
$12.00
Via kickstarter.com
Tags: screen protector, phone protector, phone case, iphone screen protector, galaxy screen protector
Categories: Android, Apple, Tech