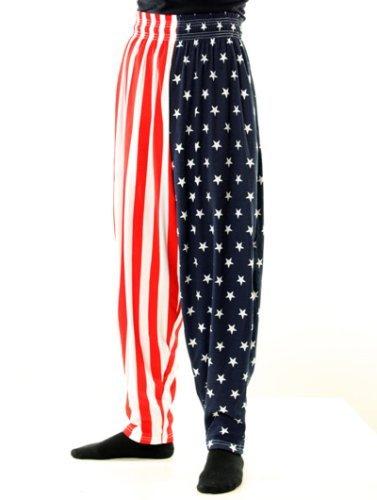 "You think anybody wants a roundhouse kick to the face while I'm wearing these bad boys?" Be part of the Rex Kwon Do Dojo from Napoleon Dynamite with these puppies! Bow to your Sen-sei!

These are also known as "Hammer Pants", made famous by the incredibly great singer/dancer M.C. Hammer of the 80s and early 90s. There are also similar pants called "Zubaz" that had weird Zebra print designs on them. But these are straight up American Flag designs so the're not really Zubaz, but they can be called Hammer Pants.

Anyway, why would you get these pants? A couple of reasons that we can see.

1) You're super patriotic and want to show it off. Maybe it's around the 4th of July and you're sowing your Independence Day oats. You're drinking your Budweiser and want to really crank it up a notch with some USA Flag hammer pants. Ok, cool, we get it! These things are badass!

2) You really like the movie Napoleon Dynamite and want to get these to complete a "Rex Kwon Do" costume. Cool! We get that too, Rex was an awesome character from a great movie.

But apparently Napoleon Dynamite is one of those movies that you either absolutely love or simply just don't get. We're on the love part of it. It's just so quirky and weird and out there and Napoleon is such and odd character. Well, really, every character is odd - there is no one in the movie that is simply a normal person, is there? And maybe that's part of the attraction to it.

Kip, Deb, Uncle Rico, LaFawnda - it's all weird and a little bit of awesome.

And there's so many quotables in that movie - if you're anything like us you can quote Napoleon Dynamite for days! Here's a sample of Rex from Rex Kwon Do:

Rex: I'm Rex, founder of the Rex Kwan Do self-defense system! After one week with me in my dojo, you'll be prepared to defend yourself with the STRENGTH of a grizzly, the reflexes of a PUMA, and the wisdom of a man.

Rex: At Rex Kwan Do, we use the buddy system. No more flying solo. You need somebody watching your back at all times. Second off, you're gonna learn to discipline your image. You think I got where I am today because I dressed like Peter Pan over here?
[points to Kip]
Rex: Take a look at what I'm wearing, people. You think anybody wants a roundhouse kick to the face while I'm wearing these bad boys? Forget about it. Last off, my students will learn about self respect. You think anybody thinks I'm a failure because I go home to Starla at night? Forget about it!

And these pants are awesome by themselves. They just exude power. You wear them and you will demand respect.

That or other Napoleon Dynamite fans will give you mucho props.

They're also a great start to a Rex costume. The only other stuff you'll need is a polo shirt, a red bandana with stars on it, and some amber sunglasses. An amazing and classic (and dare we say, timeless) Halloween costume!

Yes that's right, it's timeless because the movie Napoleon Dynamite is timeless. You can't really peg what year it's set in. It looks like it's in the 80's in Idaho, but nothing ever says that. The cars are more modern, as are other features, like Kip has the Internet and he's "chatting with babes online all day" (which you are totally jealous of).

And Rex of Rex Kwon Do fame, where do we even start!? He's an amazing character, played by the inimitable Diedrich Bader, of The Drew Carey Show, Office Space, and more lately Veep.

So yeah, it's you're looking for some sweet Rex Kown Do pants, this is where to grab 'em.

What are your favorite Napoleon Dynamite quotes? Leave 'em in the chat below if you've got a minute...

Ask Me About My T-Rex T-Shirt