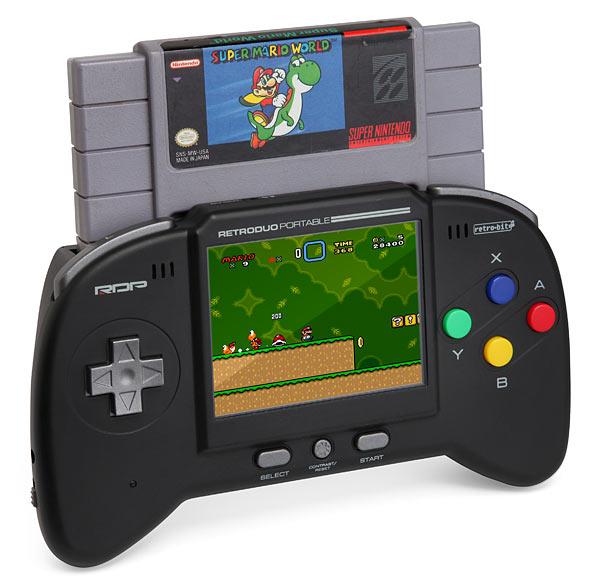 Take your old 8-bit NES and 16-bit SNES games wherever you go! Play them against another player, hook it up to the big screen, and play for up to 8 hours on a single charge. Old school games FTW!

Send that red shell right up their... SHUT YOUR MOUTH! Hey, I'm just talking about playing Super Mario Kart! You name it: Metroid, Zelda, Sim City - you can be playing your old cartridges on this thing.
Cartridges! Kids these days don't even know what they are. "You mean you had a piece of plastic and metal that had all the information hard-coded into it and you had to shove it into the game system?" Yes kids, there were no "apps" that we just "downloaded" from the "cloud". I'll quit doing quotes around everything starting "now".
And there was truly something magical about it. We'd have to rent games from the "video store" and wait to get a new game until our birthday or Christmas. There was none of this immediate gratification of buying a new game on iTunes or the Android market right now. We also had to walk uphill to school, both ways, in the snow - AND WE LIKED IT! (We also ate shoe leather. It's an acquired taste, but with mustard it's awesome.)
Ahhh, the good old days. They can be re-lived now on this little portable gaming SNES unit. By default it takes SNES games, but it comes with a RetroPORT adapter to be able to let NES games fit. There's also an optional SEGA Genesis RetroGEN adapter you can buy (sold separately).
$85.89
Via amazon.com
Tags: SNS, NES, game console, gaming, Nintendo
Categories: Gaming, Geeky