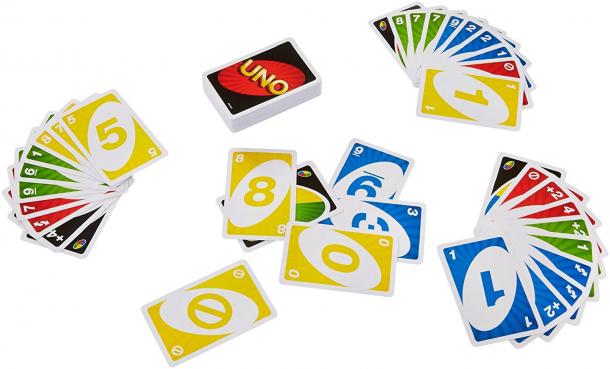 The original Uno card game - a classic that's great to bust out for any gathering, but it has a new twist.

For those unfamiliar with UNO, it's pretty simple and straightforward. Everybody is trying to get rid of their cards by playing them on other cards. For instance, you can play a red 2 on a blue 2. You also have special cards like Skips, Reverses, Draw Twos, Wild, and Draw Four Wild. So basically you're skipping people so they don't play cards and making them draw cards.

One of the fun parts was always shouting "UNO" when you only have one card remaining... kids love it.

Speaking of kids, this is a GREAT game for kids to learn numbers and color matching. Game play is quick so kids don't get bored. Even kids as little as 3 years old might be able to play this game. Plus kids love to "drop bombs", i.e. play wild cards :)

Uno might seem a little tired and boring to some adults here, but the makers of the classic card game have updated just enough to make it more interesting; you can write your own rules for wild cards! That's right, customize the wild cards with whatever you want, like everybody shuffle their hands. Or change the direction of play. Or everybody can play 2 cards (of course that's a little crazy, but hey you can do it). Or even that if you play a "2" you have to dance like a monkey or something.

Also for adults to spice it up a bit more, just turn it into a drinking game!

It's a great, inexpensive game to toss in a backpack for a weekend getaway or outing, or into an emergency bugout bag.

Even better for an 80s-themed party :)

We're sure you'll have blast playing UNO, and the price is certainly right at just under $5! Also check out the other UNO variants like UNO USA and UNO Dare!