Owl Tea Infuser by Tovolo
Kenobi 2020 - Our Only Hope Decal 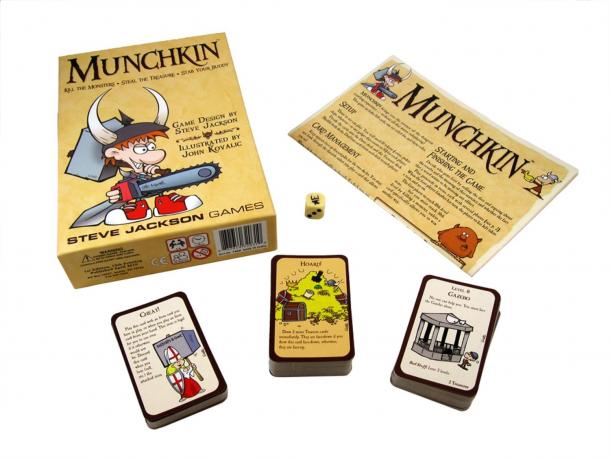 It's a super-fun RPG-themed card game for 3-8 players featuring unique artwork, funny cards and gameplay that'll keep you coming back for more!
Munchkin has been a hit among RPG, Dungeons and Dragons fans, tabletop gamers and geeks all around the world the game has over a dozen expansion sets that can be purchased separately.
This tabletop game is the base set and a good introduction to the game. The Deluxe set can be bought for a bit more (around $25) and includes a board for a more visual representation of what level the players are. In our experience you don't need it - you can use just about anything to mark your levels and you can print out a board. However, the plastic character markers are nice but those can be bought separately as well.
Each Munchkin game lasts about an hour. We'll leave the rules explanation for someone else (or maybe another time) but suffice to say that you can pick it up pretty easily. Within a half an hour we had the basics down and we were off and running.
You can help out fellow Munchkins or mess them over. Usually it's more fun to mess them over but it can lead to some heated arguments! As you gain levels and progress towards level 10 (the max level and when you win) most Munchkins gang up on the player approaching 10.
While Munchkin is a card game, Steve Jackson Games did a fantastic job of making it FEEL like an RPG game. They definitely know the genre well and obviously love old school D&D.
The add-on packs are fun too. We played several including Munchkin Cthulu, Super Munchkin, Munchkin Apocalypse and Star Munchkin. They play the same, that is the rules are the same. Some Munchkin expansions have additional types of cards like Steeds or Hirelings, but the fundamental rules don't change and there's not a big leaning curve or anything.
In short, if you love geeky things, odds are very good you'll love Munchkin as well. We highly recommend it!
$18.16
Via amazon.com
Tags: munchkin, munchkin cards, d&d rpg, steve jackson games, super munchkin, munchkin apocalypse, tabletop gaming
Categories: Geeky