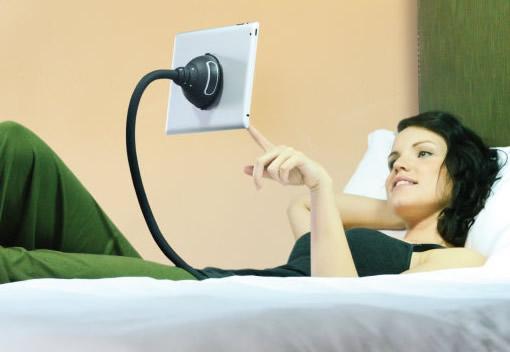 This "monkey arm" for your iPad, Nook, Kindle device, Galaxy tablet or other device VERY firmly attaches to your device. It also positions however you want it. Sweeeet!

Don't ever worry about the Monkey Kit arm coming loose - the reviews state that it attaches so firmly it can hardly come off, provided that you attach it to a flat surface. One reviewer even lifted a 10 pound jewelry case with it!
In fact the suction on the connection is enough to remove dents from cars! It has a "vaccum dock" that creates a suction so strong you can barely remove the monkey arm by hand without unlocking it first.
But the coolest thing about this flexible tablet arm is the varying positiong you can put it in. It's great for so many situations - other iPad cases you need to position just right to get the optimum viewing angle. Or you have to hold them a certain way.
But with the Monkey Kit, you can wrap it around anything and easily adjust it to the right angle.
The only thing we can find fault with on this iPad case (ok it's not really a case, but whatever) is that it might look a little dorky when carrying it around in public. For those who have gotten to the point of not caring what others think, this is a no-brainer, but for those who are a little more self-conscious of such things, it might give them pause.
But it's a minor quibble. This tablet arm weighs very little, is super portable and sturdy to boot. We can't imagine it somehow breaking. If you're looking for supreme versatility and flexibility in an iPad case, this is the one for you!
Note that this is currently a Kickstarter project which means that you're not actually "buying" this unit, but instead backing the company to get this product to market. Your reward is one of the Monkey Kits.
$80.00
Via kickstarter.com
Tags: iPad Case, monkey arm, monkey kit, flexible ipad arm, galaxy tab, nook, kindle case
Categories: Apple, Geeky, Tech