Trojan Dash Button
Gandalf "You Shall Not Pass" Car Sticker 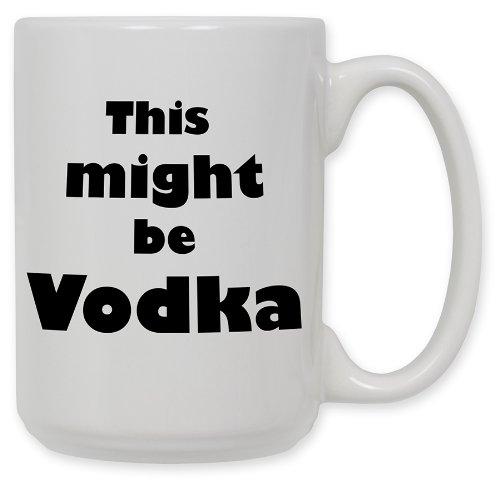 Yup, it could be. They'll never know, as vodka doesn't have a strong smell and blends right into most things.

You know that this mug is going to get used, unlike the other 6 in the back of your cabinet. Always worth a smile :)

There truly is a chance that there's vodka in any given coffee mug at any given time. And when it's at work, the odds are increased by over 34%.

We actually don't drink at work, at least not unless it's a Friday afternoon and everything is caught up. But this mug is still a fun little sly wink at the old saying. It's a great way to make some smiles, or to make those super uptight co-workers a little pissed off.

We're just not sure if the vodka is supposed to be mixed with coffee, because that seems like it would taste horrible. Maybe with enough creamer anything would be good. But we've never been ones to like the taste of vodka, especially mixed with coffee. We're about to hurl chunks just thinking about it.

Maybe a screwdriver of OJ and vodka would work, but then you're DEFINITELY tipping your hand about having alcohol in your drink. Buuuuut then again if you'r'e using this mug you're already tipping our hand. Whatever... we'll do what we want!

$16.95
Via amazon.com
Tags: coffee mug, vodka, there might be vodka in this, alcohol in coffee at work
Categories: Adult, Drinking, Home, Humor, Office

To Do List Wake Up, Drink Coffee, Poop Coffee Mug

Coffee Mug - I do not spew profanities, I enunciate them like a lady