9 Months On The Inside Infant Snapsuit 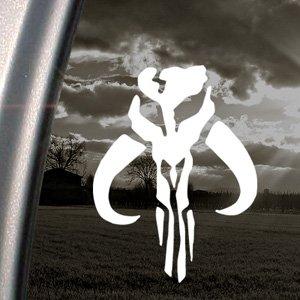 A sweet vinyl decal for the bounty hunters out there. This Mandalorian logo looks nice and will last a long time, even outdoors on your car!

Of course the Mandalore logo isn't indicative of being a bounty hunter necessarily, but quite a few of the hallowed Mandalorians have become bounty hunters over the years, i.e. the notorious Boba Fett and his clone father, Jango Fett.

A nice aside for the Boba Fett fans out there... History might have Boba Fett going down like a little bitch in episode 6, Return of the Jedi. However, that has been corrected in a later story. Lucas tried to kill the Fett-man, but he either was unable to or corrected his wrong (unlike so many other wrongs he made in the prequels, but that's a whole 'nother story).

In the collection of short stories, Tales Of The Bounty Hunters - Book 3, there's one story that talks about what happens to Boba Fett in the stomach of the Sarlacc. In short, he's imprisoned like the other that have been thrown down into the Sarlacc's pit, being digested over thousands of years. But Fett manages to escape! Some of his armor isn't damaged and he manages to free himself and blast his way out, killing the Sarlacc in the process. Who's the bitch now?

So yeah, Mandalorian's are the ultimate badass in the galaxy, and you can look like one of them, even if you're not quite that much of a badass in real life. (Hey, we aren't either, but we play them in RPG's.)