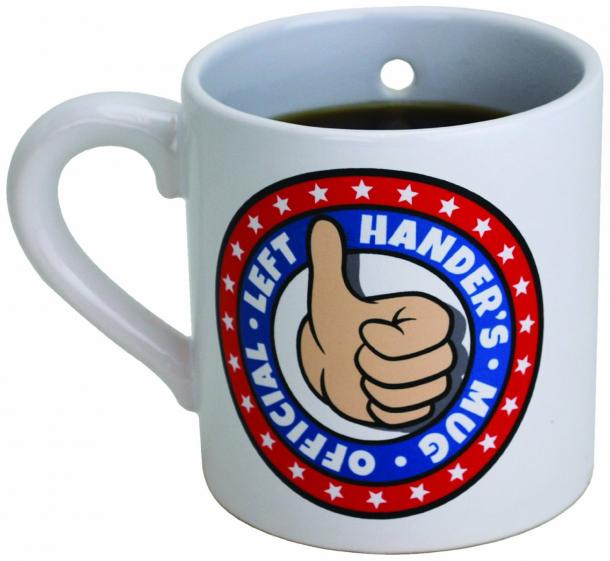 A basic 10 ounce coffee mug... but one that can only be used with your left hand! No righties need apply! (NRNA)

There's a nice warning on the back (the side with the hole) that drinking this mug with your right hand can be hazardous and hot coffee will spill on your chest, face and/or lap.

Now, being left-handed we can appreciate this. Most of our early young life we were singled out and thought of as "different". We were given crappy left-handed scissors that looked like they were for babies with little protective plastic on them. They never worked for us so we quickly learned how to use the "regular" right-handed scissors.

Plus we didn't really appreciate the scrutiny of the right-handed kids of us lefties. It was really the first time we had encountered prejudice. Like left-handed people were different and smelled and they weren't quite sure what to make of us. Like maybe a 3rd head would grow out of our torso. Errrrr... we mean 2nd head! Didn't mean to imply that we were an alien species with 2 heads.

Being left-handed is like being part of a little club. We've had to band together and feel special because we were singled out and because the world seemed set up for right-handers. It's like a lot of small groups that have to band together for support against the majority.

There are tons of things that left-handed people have to put up with. For instance, I have to arrange with my wife where we sit when we eat, with me on her left, that way I don't elbow her.

Writing sucks for lefties. We write from left to right, so you drag your hand across what you write. If you use a pen, the ink can get smudged all over the paper. And with pencils you get graphite all over you. And spiral notebooks (and 3 ring binders) suck because for the first couple of inches your hand hits the damn metal spiral!

Also, ball point pens kind of suck because most lefties push the pen right instead of pulling it, so pens stop up more.

We also have to fight for materials like baseball gloves and hockey sticks in gym class. (Same goes for other school supplies like scissors - there never seemed to be enough for us!)

Nowadays with tablet technology, we're still screwed! On a Kindle, the left side of the screen is the back page button. We typically hold a Kindle or iPad with the left hand so we have to reach ALLLL the way across the tablet and swipe to a new page. I know, first world problems, right? :-p

Still, righties can use this coffee mug too. We're not gonna be too picky. They just have to use their left hand or drink out of the little hole. Of course, they could also cover it up with a finger or piece of duct tape.

Although... should we let them use it? Should a test be required to make sure only lefties can use this mug? And how would we test that over the internet? Hmmm.....

Anyway, to sum up this epic monster of a post, most left-handed people love the old saying, "left handed people are the only ones in their right minds". This is totally true.

Coffee Mug - I do not spew profanities, I enunciate them like a lady

Talk To The Hand Sticky Notes