Cats On Pizza In Space T-Shirt

Sneaker Bag For Washer And Dryer 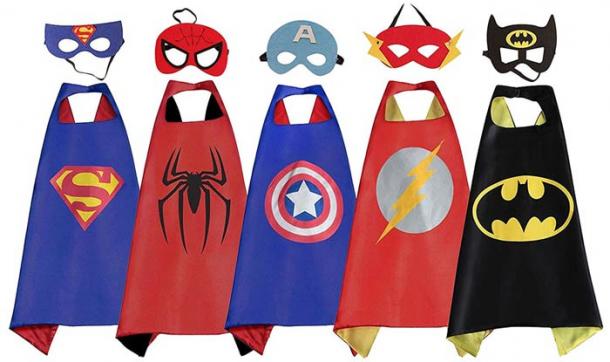 You get a set of 5, count 'em, FIVE superhero costumes! They're both DC and Marvel superheroes including: Superman, Batman, Captain America, The Flash and Spider-Man. You get 5 capes and 5 masks and they look super-cute!

That said, you need to know what you're buying here. While these are pretty good quality, look cool and all that, we're fairly confident that these are not authentic licensed costumes from the owners of the trademarks (Marvel and DC).

These appear to be slightly modified logos that resemble the real thing pretty closely. The average citizen or child probably won't notice this. But if you're going for the real thing or you have a kid that's a supernerd like us, then he or she will probably spot the differences.

Honestly, the differences aren't that many. It's subtle things, the like look of the "S" in the Superman logo. It's definitely a different font than the real Superman logo. Again, most people won't spot this or even care if you mention it to them.

The thing to realize is that these are made by some company likely in China that's making knockoffs. That's not necessarily a bad thing, you should just be aware. Marvel and DC will likely at some point come after these guys and you won't be able to buy these - so if you when them, get them now!

All in all, these are really good superhero Halloween costumes. And for the price of 1, you get 5! Kids will love dressing up as the various heroes, plus they can play with their friends. I would've KILLED for these when I was a kid and we were running around pretending to be one of the Superfriends (I loved to be Green Lantern most of the time).