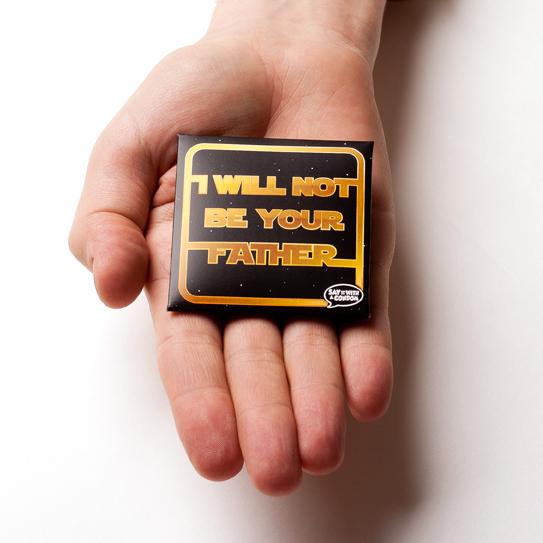 Luuuuke, I will not be your father. The whole purpose of condoms is to not make a baby, and the Force is strong with these condoms.

$4.00 is a lot for a single condom, but the point here isn't cost, it's the cool factor. Say It With A Condom has a ton of funny condoms and you can even design your own.

Sadly, and something a lot of people don't know is that condoms are only between 85%-98% effective. Under pefect usage they're still only 98% effective. We're not really sure why this is even after a bunch of research, but the stat is that "typical use" makes condoms 85% effective.

We're guessing there's a certain amount of breakage in there and depending on how ... rough ... things go that increases the chance of breakage. Also perhaps there's a chance of the condom slipping off.

It's just good to know that they're not 100% effective as that seems to be the popular notion. So wrap that rascal as well as look into other options and don't make any babies unless you really want to!

And of course, May the Force be with you.

$3.95
Via sayitwithacondom.com
Tags: I am not your father, Star Wars, may the force be with you, funny condom, star wars condom, don't make a baby, condom effectiveness
Categories: Adult, Geeky, Home, Humor, Wearable

Please Don't Speak To Me While I'm Not Listening T-Shirt