I Am The Walrus T-Shirt 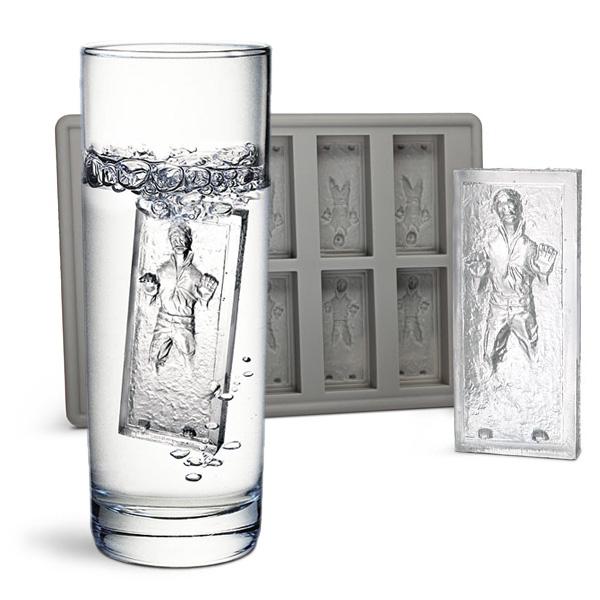 Awesome ice cubes in the shape of Han Solo frozen in carbonite! Does not cause hibernation sickness - although if you drink enough alcohol cooled with this ice, you might not be able to see.
It makes ice colder than a Wampa's butt. Ok, this statistic is totally unverified, because who would want to get close enough to take it's temperature?
It makes ice colder than Boba Fett's stare. How's that? Even though we never really saw his eyes. Except if you count the prequel, when he was a little kid. But then, many of us deny that ever happened, or will even acknowledge the existence of the Star Wars prequel.
You don't see any Jar Jar Binks ice cube trays around the Web, do you? At least we wouldn't put any on this site. Then again, the thought of Jar-Jar in carbonite IS rather pleasing. Ok, perhaps that should be a product after all.
Hey, here's something interesting: if you boil the water before making ice in this tray, it "deaerates" the water, or drives the air molecules out of it. This makes the ice super clear.
This tray can also be used to make chocolate versions on Han in long term storage.
$11.19
Via amazon.com
Tags: Han Solo, Carbonite, Star Wars, Boba Fett, ice cubes, ice cube tray
Categories: Food & Drink, Geeky, Pop Culture