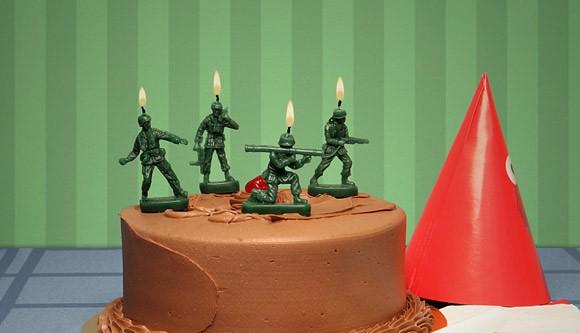 The classic green army men figures in their well-known poses - but as candles! Awesome for kids into army stuff or parties for those in the military and veterans

For kids that don't know the excitement and fun of playing with hard plastic little green army men, well geez, how can we recreate that experience? This was back in the day before hand held video games and computers and tablets everywhere. Some of us had a plastic little dude with a mortar or a bazooka and all you could do was imagine what they'd be doing.

Being stuck in one pose isn't that much fun, so we'd get creative by doing things like burning them, melting their guns, their arms or legs off. Or perhaps blowing them up with firecrackers. It's cool, they were so numerous and cheap that you could afford to have some casualties.

These army men candle rekindle the flame of the olden days. (See what we did there?) It's a nice way to be nostalgic and/or for kids to see the sort of toys their parents (or grandparents) played with.

Again, very cool for a cake for a veteran or someone really into miltary type stuff. Very unique!