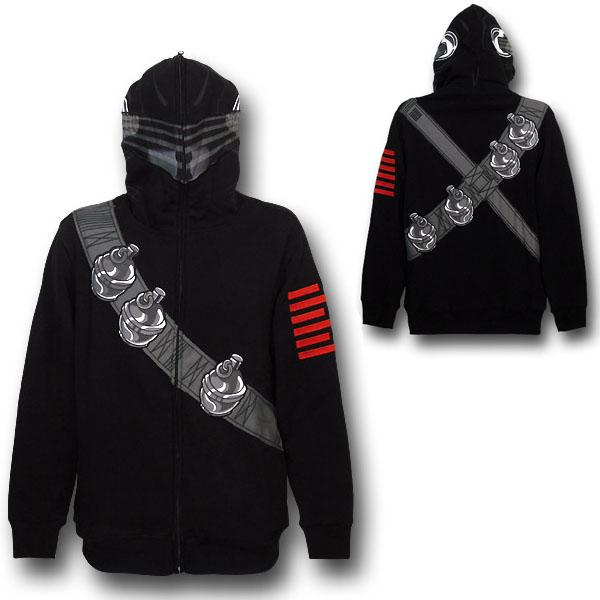 This hoodie looks like the most badass of badass hoodies. We thought we were over our nostalgia of G.I. Joe, but after seeing this, we realize we were clearly wrong; we want this.... badly.

As kids, we loved G.I. Joe. It was the height of awesomeness for boys growing up in the 80s. For a generation that didn't have the Internet yet, having a combination of toys and a connected media in the form of a TV show every day after school if was like crack. And some of us even collected the comic books!

It was army dudes but taken to the next level, with lasers and ninjas and extreme baddies in the form of the evil Cobra (the enemy). Of course in the cartoon, it was inexplicable that Cobra Commander was such a friggin nincompoop, but ah well. There was always the badassery of Destro and Zartan and Tomax and Xamot and Dr. Mindbender and the Baroness to counteract that idiocy of Cobra Commander.

As an aside, the action figures of Cobra Commander were SO well done. If you could discount the cartoon, he was super cool.

But getting back to  Snake Eyes, he was the highlight of the early G.I. Joe stuff. He never said a word and yet was always there to kick some ass. The comics had a really cool yet dark take on everything, with his brother Storm Shadow and how Snake Eyes suffered an injury in Viet Nam that left his scarred and speechless (we're not sure exactly what happened but we think it had something to do with his vocal cords). And the scarring would make sense since he never took his mask off. At least, that much was implied in the comics.

But the G.I. Joe comic books could go so much further than the cartoon. The cartoon had to stay mainstream, the comics could go deeper and tell weirder, more adult stories (and that's what WE latched onto).

In both cases Snakes Eyes was the ultimate badass hero. An enigma who looked super cool and could do just about everything.

And this hoodie brings us back to those days when heroes existed. The days when all was right with the world, or at least, bad guys existed but the heroes would come along and put everything right and we wouldn't have to worry.

And the I-Ching emblem on the side tops it all off! It's the same I-Ching symbol  that Storm Shadow had on his if we're not mistaken. There was some reason that both ninja brothers have that same tattoo, but it's been so long we can't remember why or what it means.

In any case, we're saving up to buy this hoodie, that's for sure! Then we'll go in the basement and break out that old box of G.I. Joe toys and go to town.