What If I Told You T-Shirt 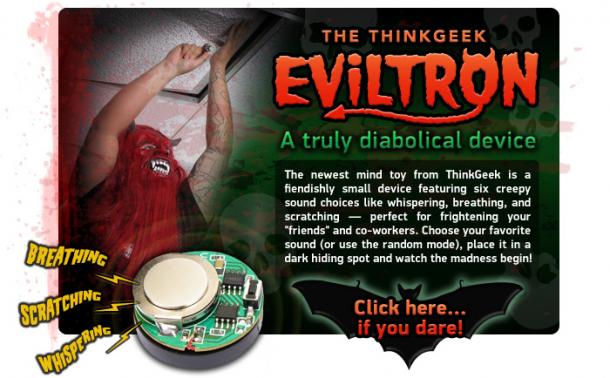 This thing is truly evil: hide this tiny device in a friend's house and it'll give off evil sounds for up to a month. Sounds include sinister kid laughter, whispering "Can you hear me?", scratching, gasping, creaking and random mode. Drive people crazy(er)!

The Eviltron is a step up from the Annoyatron. It's awesome for annoying people, yes, but it's actually freakin' EVIL! Picture this...

You place an Eviltron in someone's house, maybe above a light fixture if they have those panels you can remove in the ceiling. Or maybe above a high counter or cabinet. Basically anywhere it can't be seen obviously.

Then this thing chirps at totally random intervals. You can set it to do just one of the sounds but even better, you can randomly do any of the 6 sinister sounds.

So your unsuspecting friend hears things like some odd creaking, or scratching sounds. Then in the middle of the night they are awakened by an evil-sounding child laughing. They finally get back to sleep and a couple of hours later, in the wee hours of the morning they're again awoken but someone (something?) whispering, "Hey, can you hear me?"

This better be a really good friend. At the very least they'd better have a great sense of humor!

It also has a magnet on it so you can slap it underneath a counter or something. It comes with a battery that will last many months.