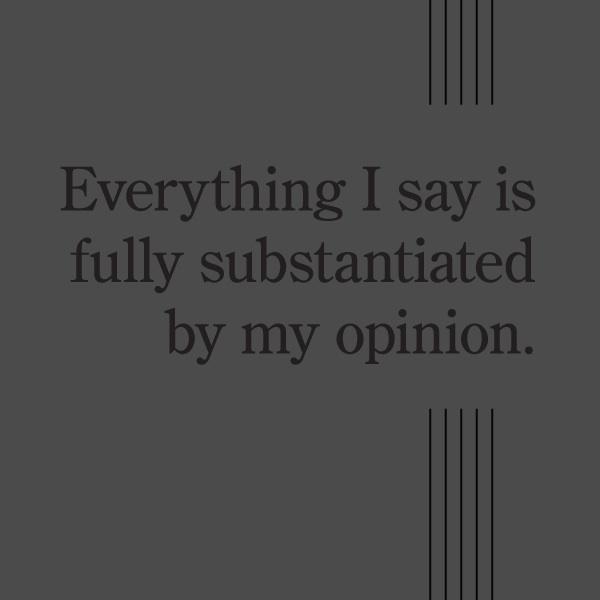 Yes, indeed, your opinion rules over all else. At least on the Internet. In RL, maybe not as much, but this shirt can let everyone know how you feel!

As the Dude would say, "Yeah, well, that's just, like, your opinion, man."

But it's a strong one, and a valid one. No one else can tell you your opinion is wrong. It's what you feel, yo, deep down. It's not a fact, it's something based on stuff other than fact.

The dictionary (or, well, Google that is, as Google has supplanted any dictionary) states that Opinion is defined as: "a view or judgment formed about something, not necessarily based on fact or knowledge."

But in our opinion (heh, recursive thought here), the best opinions are a combination of facts, experience and intuition.

Take the best of what's around like Dave Matthews said and use the combined knowledge of human existence as well as your own gut instinct and experience and form the best opinion you can.

The best thing about your opinion is that it's your own and no one can deny you it. Some can refute it, but the best opinions cannot be proven to be invalid.

So wear this shirt proudly and spout off your strongly held opinions to those who will listen. If they're good enough, your opinions just might rub off on the right people and spread. Let's hope they're good ones.