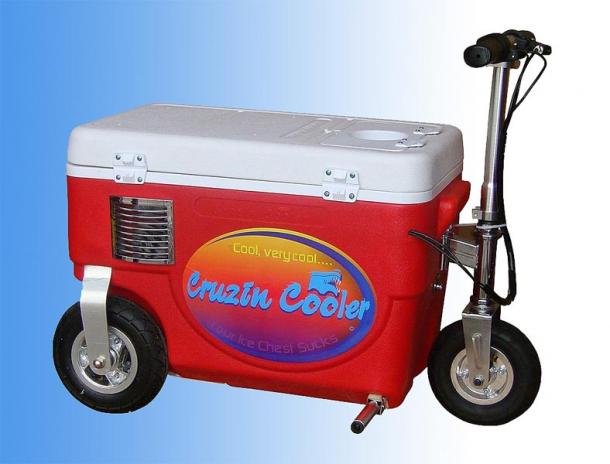 The coolest way to get around AND keep your cold beverages at hand!

I mean, it's a DUI waiting to happen, but it's all worth it. Maybe you could just use it to ride around a campground or festival though. And we suppose if you aren't actually *drinking* with open containers, this would be totally legal to tool around the sidewalk with.

Top speed on this bad boy is about 10mph with a full range of 10 miles. This is assuming the rider weighs about 200 pounds. The whole cooler and scooter contraption weighs about 80 pounds itself.

The cool thing is that even if you run out of battery, you can still pull or push the cooler around on wheels. Or just sit and scoot around on it.

There are some custom aftermarket upgrades that are common to make to it too, like adding a keyed throttle so that no one drives away with it!

But yeah this thing is REAL and actually works to tool around a campsite with.

One lady even claims that she picked up her granddaughter from school :p

Now, you could totally build your own, and for the DIY among us, that's a much cheaper option. But that also involves a lot of work and time. I wouldn't want to do it, and I'm not sure that I'd really save that much money. For something like this I think I'd just shell out the money and buy the thing!

Anyway, I want one. Do you?