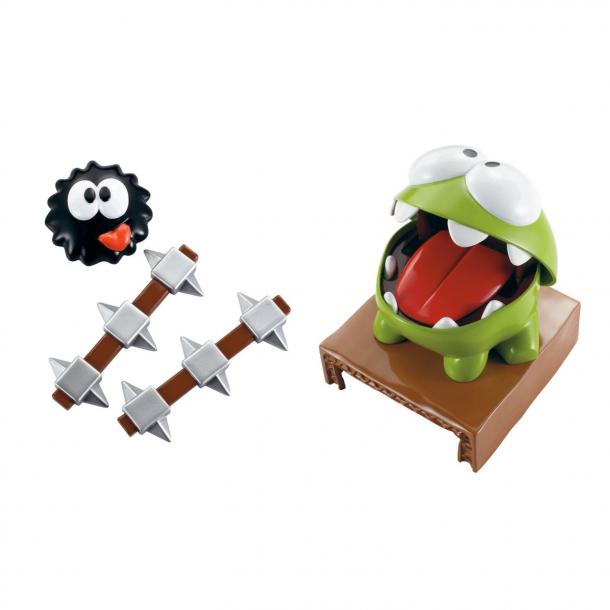 Play the Cut The Rope app in real life! Keep 'lil Om Nom safe from spiders and spikes and GET HIM THAT CANDY! All the joy of the app but can be played during post-Hurricane power outages or after the zombie apocalypse.
iPhone or Android not included nor required. Unlike most games these days, it does not require batteries.
Quite frankly, we're not sure how it works. We're too used to using electronic devices, we're not sure we could figure this thing out. But it comes with 1 Om Nom, 1 Candy Launcher, 1 Candy Game Piece, 1 spider, 2 spike strips, 1 bubble and 22 cards. Supposedly you're supposed to move these things around yourself. There is no computer mastermind that does it for you.
What the what? What has the world come to? Every game should be video or otherwise connected to an electronic device. Otherwise it might promote some sort of individual thinking. Do not buy this or you're going against the Borgification of humanity. We must all get with the program and be assimiliated like all the other races.
But then again, there's Om Nom and he's oh-so-cute. I just can't quit him. Maybe it's not a him though - has it ever been established if Om Nom is a boy or a girl? Perhaps it is androgynous. Perhaps he is part of an alien race sent to enslave us by means of grabbing our attention and slowly we fall into their  mindless trap. "He's so cute, cutting these ropes is so interesting, I must continue, Om Nom NEEDS to be fed!"
And before we know it, they have ever so cutely established world domination. We're all enthralled by our phones, walking around in a happy, stupid, placated daze. This board game is for those who exist outside the system. The Amish, the elderly, those poor souls without the extra cash to afford a tablet device.
Ahh, but ignorance is indeed bliss, and how happy we'll be. Awww, look at that cute lil Om Nom! I can't stay mad at you!
$9.99
Via amazon.com
Tags: Cut the Rope, game, Om Nom, board game, table game
Categories: Gaming, Geeky