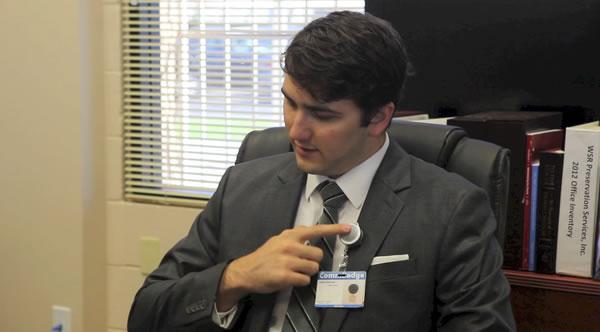 You know how in Star Trek they tap their communicator badge to talk to people - even an away team on a planet? That's what this is but it uses your phone.

It's a bluetooth communicator that connects with your smartphone - either Android or iPhone device. Just tap it to answer or make calls. No more silly bluetooth earpiece.
You can also send and receive text messages via text-to-speech. Totally handsfree and lets you get updates like calendar reminders and social media updates via sound, vibration and LEDs.
Even better, the CommBadge synchs with Siri, Google Now and S Voice so you can do most of your smartphones voice commands.
Perhaps most interstingly, from a scientifitic standpoint, is that it somehow scrambles the audio beyond a 1 meter range. That means people can't hear the person you're talking to, keeping your conversation at least somewhat private.
We're curious to see how well this works in real life, but the promise is pretty awesome. We can't wait until you can get something EXACTLY like a Star Trek communicator badge, but until then, this is the next best thing.
$80.00
Via indiegogo.com
Tags: commbadge, Star Trek, phone communicator, Siri, Google Now
Categories: Android, Apple, Geeky, Tech