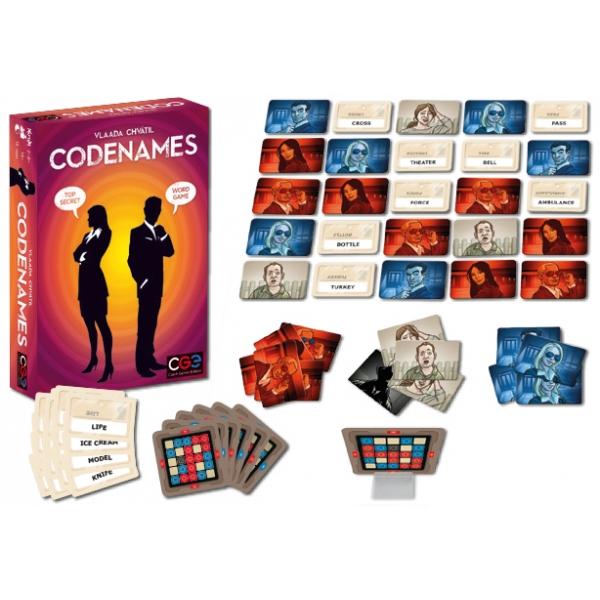 Codenames! This is the game of the year for 2016 by several popular board game review sites. But it's not really a "board game", nor is it a "card game" necessarily. This game defies a genre, but it's still really cool.

This is a social word game. It's easy to pick up but hard to master. Here are the basics of Codenames:

You play with 2 teams and each team has a Spymaster. The Spymaster on each team knows the location of 25 secret agents.

There are cards all over the board/table with words on them. Each card could be a secret agent. The thing the Spymaster has to do is get his teammate(s) to guess the location of the spies - or rather, to pick right cards. But the Spymaster only gets to say ONE WORD.

For instance, if the Spymaster is trying to get his teammates to guess the cards "cat" and "dog" he could say "animal" as the clue. However, what if the opposing team has the "lion" card? If they pick "lion" the other team would get a point. A better clue would be "pet".

As you might be able to glean from this example, it's tricky to give a good clue.

The first team to guess all their cards wins, so you usually want to try to target multiple cards at once.

Codenames works with 4 people (2 to a team) but really shines with more than that. With more people you get more discussion and speculation about the spies/cards.

But, math geekery aside, this game does not require that much thinking. And the thinking it does require is typically pretty fun.

You can usually get a game done in under 30 minutes. The box says 15 minutes, but we've found that it's usually a little bit longer with some arguing in there.

It's good for ages 14 and up, but if you have smarter kids then maybe 12 and up. Our 10 year old did ok but offered very simple clues. He got a little frustrated that we weren't guessing his clues, so yeah, a bit more maturation of his brain and the game will be great for him.

All told, Codenames is a fun little game that has a lot of replay value. And for just $15 it's a game that will proudly sit on your shelf of repeat plays for at least a couple of years to come!