The Princess Bride Board Game 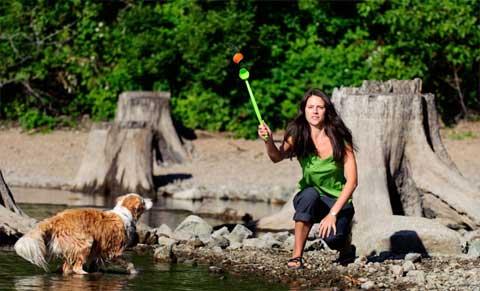 The Chuckit! dog ball launcher is a must-have for dogs that need lots of exercise and love to play fetch. It's also great for humans whose arms get tired out quickly.

This ball launcher is great - with the flick of a wrist you can literally launch a tennis ball a hundred yards! You can easily throw a ball 3x further than normal with one of these, plus you don't get worn out.

On top of that, if you don't like to pick up slobbery balls, this is for you. Just scoop it up with the Chuckit, although a little practice is required. You can also scoop up balls out of the mud if you don't want to get dirty.

Throwing a ball over and over again can take its toll. And the older we get the harder it is to throw 30-40 yards or so. If you really want to get your dog exercised you just might overdo it yourself, and that's where the Chuckit  comes in.

I mean, I do love to throw for my dogs but after 10 or so throws I need a break. I've even started to throw with my opposite arm in order to take some of the strain off my good arm. (I'm actually getting quite good at being ambidextrous!) But still it's nice after a while to just let the Chuckit do most of the work.

This is really one of the best fetch toys money can buy.

The one caveat that we have is after a time (a long time, like a few years of use) this can degrade to the point where it's not as "snappy" as it was. The plastic gets bent so much over the course of time that it just doesn't have the tensile strength to launch the ball as much as it used to. Plus the prongs on the ball carrier area can get bent to the point where it won't hold the ball long enough.

Still, for the price you really can't complain. If you're using a Chuckit that much, you've surely gotten your money's worth out of it. Just buy a new one every year or so and quitcher bitchin. :p

Seriously though, owners of high energy dogs that love to fetch, like golden retrievers, will absolutely love this thing.

Buy one of these ... your arm will thank you!