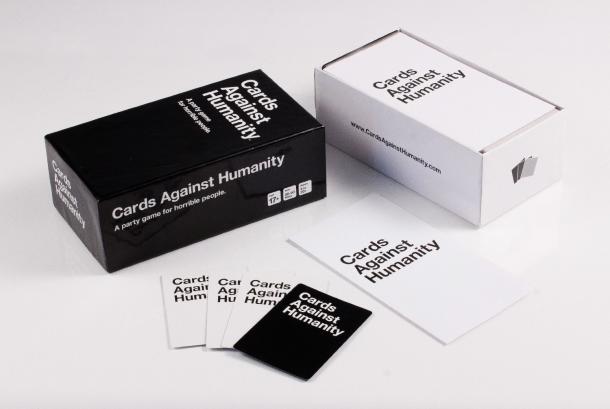 It's rude, it's crude, it's socially unacceptable - and it's a *whole* lot of fun! Try out the awesome Cards Against Humanity at the original list price!
A great game while sober or drinking, as it's easy to play and yet the replay value is very high. Anyone can pick it up quickly as you just throw a card down - and there's no wrong answer.
Basically, you need to complete a sentence. One card is read aloud to all the players, for instance, "White people like ____". You fill in the blank by playing the best card that fills it in. You can go for funny, insane, lewd, whatever you want, but for instance in this case, "Amputees". Tons of other answers are available, including examples such as "scissoring", "cutting the cheese at a funeral", "Road head", and more. If your combination is the best, you win that round.
Some blank cards are included as well for you and your friends to create your own disgustingly hilarious questions and answers.
Another great Cards Against Humanity combination is:
"The class field trip was completely ruined by" ... answer: "An M16 assult rifle"
Oh so wrong.
Of note, the game makers also state that: "0% of the proceeds will be donated to the Make-A-Wish Foundation". (We think this is totally tongue-in-cheek btw)
$25.00
Via amazon.com
Tags: card game, lewd card game, crimes against humanity, socially unacceptable, cutting the cheese at a funeral, road head
Categories: Gaming, Geeky, Humor