The Meaning Of Time Clock 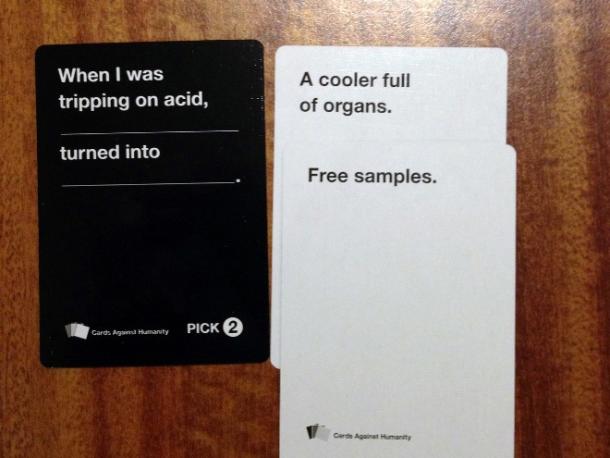 Perhaps the single most politically incorrect and most fun game at the same time! A truly open-source game that rocks and if you've somehow never played it ... you've GOT to check it out. Trust us on this one.

It's sort of like a grown up version of Apples to Apples. One person reads a question aloud, the other players play a card from their hand to complete the sentence(s). For example, here is a question that comes on a black card:

"Life for the Native Americans was forever changed after the white man introduced them to ____________."

Each player then plays a white "answer" card. These can be almost anything. For instance:

"Smallpox Blankets"
"Drinking Alone"
"A Can of Whoop-Ass"
"Take-Backsies"

Then the reader reads all the answers aloud and selects a winner. The selection criteria can be whatever he/she wants. Just her favorite answer, funniest, most non-PC answer, anything. Generally it's the card that gets the most laughs.

The player whose card was selected get 1 point. You play until a certain number of points or until everyone is too drunk to continue.

As the Cards Against Humanity website says, the amount of possible combinations are staggering...with "Over 13 duodecillion possible rounds (10^40) with 6 players".

And yes, if you play it for a while it will get old, or at least you'll get to know most of the cards. I suppose they don't get "old" per se, but they'll get less shocking and you'll want more diverse, newer and perhaps more shocking questions and answers.

Cards Against Humanity (CAH) knows this and gives you some blank cards to fill out with whatever gross, zany, offensive bullshit you want to write. Or, y'know the names of you and some of your friends & family.

CAH also offers a shitload of expansion packs. These are all pretty good and will keep the game fresh.

As we mentioned the game is open source, which means that you don't need to buy the game. You could go online, download the cards and print them out. Although you won't have the cool card stock and it'll require much more work than buying the game. But the game is worth it in our opinion. $25 for the starter set of 550 cards (460 White cards and 90 Black cards) is not a bad deal.

You really can't go wrong with this as a party game, ESPECIALLY if one of your friends or family members is easily put off. Those are the best people to play it with!