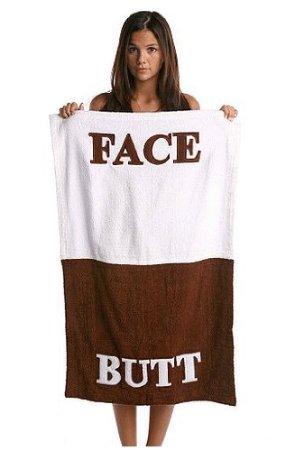 Get it right each time!  One side for your face and one for your backside. Not to be confused with a buttface towel.

This is a clear way to distinguish your butt from your face. This towel should help you keep the ass end on the right side and your face clear from getting the ass-end.

This is clearly more of a novelty/gag/humorous item and not really a great towel. I mean, it'll work as a towel but it's more of a chamois quality and not a full beach or bath towel. It'll work, and it'll do in a pinch, but if you want something with a bit more comfort, this is not the towel to get. It's simply meant to make people laugh and distinguish between the butt and face.

That said, it is pretty cool, funny and useful at the same time. The towel was first seen on the Show Always Sunny in Philadelphia.

For those that re-use their towels (and shouldn't we all?) this is great. It's not just good for the environment to re-use a towel a few times, but it's also better for your utility bill. The less dirty laundry you go through, the less electricity you'll use. And really, if you're just wiping off after a shower, there's no reason you can't use your towel for a week.

However... if you haven't cleaned so good you don't want to use the wrong end of the towel on your face. Plus it just feels wrong to use the side that you wedged through your butt to then wipe off your face with. Some people have different levels of "being ok" with this though. Like Howie Mandel, he's a clean freak that could NOT handle using a towel again. Other people could re-use a towel but never put the butt end on their face. Well, here ya go, a towel that's perfect for them!

If nothing else, it's good for a chuckle. Toss it in the guest bathroom and hang it up for guests to see.

As Towelie from South Park says, "Don't forget to bring a towel!"