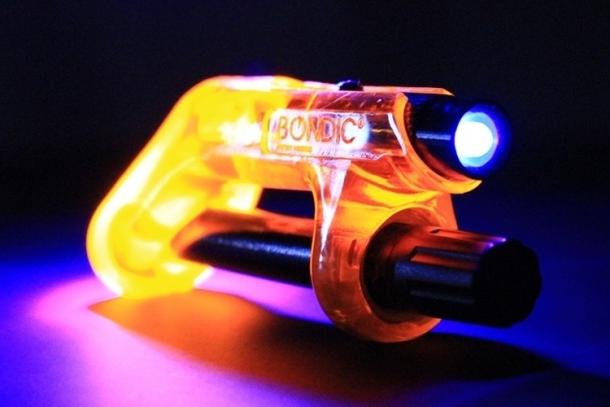 Bondic is an amazing tool that helps you fix almost anything around the house, office or workshop. It's a smart tool that uses liquid plastic and a UV light to transform the liquid into a solid.

The really awesome part is that the plastic liquid solution won't harden unless and until a UV light hits it. This means that you can set the broken parts, get them perfect before fixing them together.

The original Bondic is available on Amazon for just $20 bucks. It comes in 2 parts: the liquid dispensing device that has a fine point so you can get just the right amount of liquid plastic, and the UV light to cure/harden it.

It can bond metal, plastic, glass, wood, almost any kinds of surfaces. It's super handy for most any project.

In the grand scheme of things Bondic isn't mean to truly fix things permanently. It does hold very well, but it's plastic and plastic isn't the hardest or most bonding material known to man. It does a very good job, but in some cases it's really only a temporary solution until you can repair or replace the original device. For some basic household stuff though it's just fine. It really depends what you want to fix.

For example, to patch up a frayed iPhone charging cable, you'll probably be just fine with Bondic. However if you have a broken plastic bike pedal, it might work ok for a while, but the repeated strain on the pedal may not hold up over the course of time.

All in all though, Bondic is pretty dang awesome! And the makers go well out of their way to let us know that Bondic is not superglue. Again, it doesn't harden until you want it to, which is nice. Also your fingers aren't going to instantly stick together like superglue does to them. There's MUCH less mess with Bondic and messes are easily cleaned up.

One drawback is that Bondic can't really be used in direct sunlight. This is because sunlight contains the broad spectrum of light that includes the UV rays that cure the liquid Bondic. So yeah, Bondic will instantly harden in the sunlight. That's ok though, there are plenty of ways to work on stuff inside, in the shade or to create shade over what you're working on.

Bondic is badass and super useful for fixing just about anything under the sun (er well, not out in the sun, it's just a saying :p). F'rinstance you can fix broken eyeglasses, vinyl in a boat, plastic of any kind, chipped marble, broken chairs, toys, electronics... I mean you name it and Bondic is likely to able to at least apply a patch for a while.

You can buy the original Bondic kit on Amazon for just $19.99. The 2nd gen BondicEVO™ is available on Kickstarter for $20 Canadian. [https://www.kickstarter.com/projects/notaglue/bondicevotm-liquid-plastic-welder]