There are twelve days left until Christmas so we thought it was the perfect time to give anyone who is still looking for kids gifts some more ideas. There’s still plenty of time to order, have shipped and wrap up these cool presents (even better if you have Amazon Prime for the 2 day shipping).

We researched the most popular stuff among both kids and adults and weighed in lots of things like price and quality. And really, they’re not the 12 coolest kids gifts ever, but they’re hot for 2013, that much is for sure at least :-p  Without further ado, here are the gift ideas! 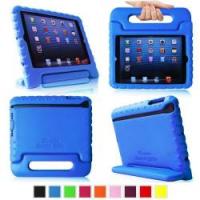 This iPad case is made for kids and can withstand most bounces and drops. It’s made of the same heavy duty EVA foam used in the soles of high end sneakers.

OMG, if you haven’t seen these things, you need to. They scitter all over the place and act like real bugs! They react to light, sound and walls, you can clap and make them move in a different diretion. The Scarab Hexbug will flip itself right-side up and is extra fast.

Hexbugs are one of those things thats not just fun for the kids! Three button cell batteries are included, but check out this 50 pack of lithium batteries (perfect for Hexbugs) for only $5.08.

A new take on the classic game of Operation. Lots of replay value and something nostalgic for the adults too! (“You’re the Doctor, collecting all your pay!”)

Part of the huge swing this year in electronic toys that respond to you. You can pet her forehead, wave her toy at her, squeeze her paws of press her back – and she’ll pounce, jump, purr and otherwise do her kitty cat thing.

To the chagrin of many parents the Monster High thing is still really big this year. They’re really well crafted dolls, and if you can get over the ghoulishness of some of them, they’re pretty cool. At least this one is under $10 bucks!

Comes with 3 figures, 3 trading cards and 3 sticker sheets with secret codes. You’ll pay the price to get these in a 3 pack, but such is life. We see the attraction for kids – these figures are very detailed and hefty and the tie-ins to the videogame is something that we probably would’ve loved as kids too.

An always fun craft item that kids can use and re-use.You can buy additional types of bracelets like glow in the dark, camo, scented and more. (For a cheaper version that works about the same, check out Funloom)

You can even make them for your cat!

While it’s on the pricier end of the scale, this can curb the enthusiasm of kids who want a real dog who aren’t ready to take care of that dog. This dog can still be trained – you touch it on the head to teach it tricks and have it progress, or simply put it in tricks mode and it’ll randomly do tricks.

Ok, so Minecraft is all the rage among young boys so just about anything Minecraft will probably be a hit. But this goes an extra step, taking the game into the real world with high quality paper that can be crafted. You can actually print out similar stuff from guides online and cut and piece everything together – but this stuff is SO much easier and more durable!

Lots of replay value here and something that’ll look cool on a shelf too.

We typically recommend the iPad or iPad mini, but for kids this might really be the better option. First is it’s tons cheaper and secondly it’s much more durable even without a case than an iPad.

This tablet is fast enough to do what kids want to do on it (i.e. dinking around on the Internet, playing Minecraft and IMing their friends). It has 32GB of space (which is more than enough), Wifi, a fast dual-core CPU and… well we won’t bore you with the tech specs, just suffice to say that for the great price it’s a pretty decent deal. Again, it’s not close to top of the line but it’ll get the job done for a year or two.

Gizmos and Gears by Learning Resources

A bunch of different gizmos and gears for the creative kid. Unlike *some* mindless videogames, this gets the brain going and adults might want to jump in on the fun too. There’s all sorts of different possibilties with this making for endless play!

Barbie? Check. Little Mermaid? Check. Princess? Check. 3 of the core things that many little girls like are present in this present.

This Mermaid Barbie’s tailfin changes color in the water. It’s slightly bigger than the normal Barbie dolls and actually holds up well when regularly used played with in the bathtub.

*Please note – prices listed are at time of writing and are subject to change.

If you’re looking for more of the coolest gift ideas, check out our Toys page – there are over a hundred toys and games for children (and big kids) there!