Oh Shit Not You Again Doormat 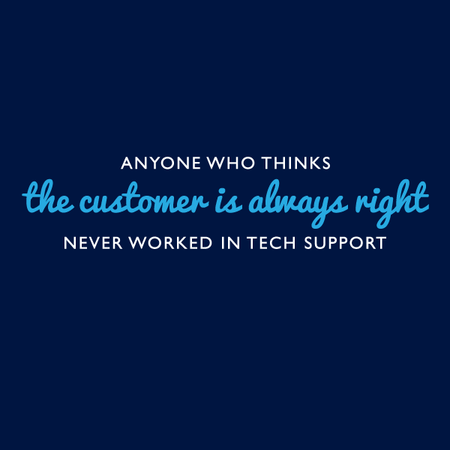 This is for the Tech Support folk out there - no one else will even believe the stories we have!

If you *have* worked in Tech Support or had a friend or relative that did, then you'll know that this shirt speaks the truth. Well, it doesn't *speak* it per se, it's a shirt - it doesn't talk! We're not crazy enough to think that shirts talk, althought admittedly, we're close.

But really, whatever type of Tech Support it is, you've got stories. We had one where the user called in saying the Internet wasn't working... but power was off at his house. >.<

Of course, most of the time the classic trick is simply to have the user reboot and then things work. The IT Crowd thing of "Have you tried turning it off and then on again" is actually one of the best things to do! It's because Windows used to be so bad that it just needed rebooted from time to time - and some people NEVER did that!

Of course, back in our day, we'd also prescribe a Scandisk and Defrag and call us in the morning. That was a little trick to get them off the phone as well because defrag took FOREVER.

Dont get us wrong - we also tried our best to get the user's computer fixed, but 90% of the time it was either user error or you couldn't get the user to do what they needed to do. It might have been a simple setting but it was buried in the control panel, and no amount of tlaking them through it would get them there. They'd be like, "what's a right click?" or "You want me to write 'click'? Where do I write it?" >.<

Suffice to say, the customer is not always right. A lot of the time they'd say, "Your server is down, isn't it? I know it's you guys". Meanwhile they don't have a phone line connected to their computer. (This was back in the days when you had something called a "MODEM" and needed a phone line to connect. Lord how much better things have gotten!)

Anyway, if you've got a great tech support story, by all means, share. Dish, girl.

Because we've been there. Maybe not the same exact technical problem, but similar situations and similar dumbness on the other end of the phone.

Ain't Nobody Got Time For That T-Shirt