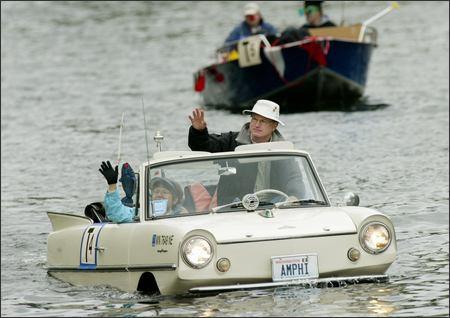 The Amphicar is the world's first amphibious car - capable of up to 70mph on land and 7 knots on the water (or about 8mph). You can splash into the water, quickly turn on the props and off you go!

The Amphicar is really an amazing vehicle (and we didn't pronounce that "vee-hickle" like some people do, that's just weird). It's a German machine, built after WWII from 1961 to 1968.

Despite it's capabilities, it never sold that well at the time, selling just around 4000 vehicles total. However the collector market has taken off and it's now the most sought after amphibiou cars in the world. 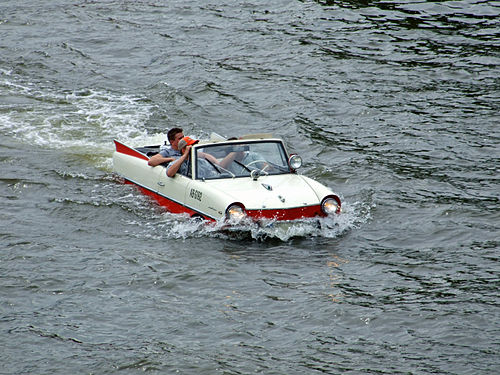 How it works is really cool: You can be driving along on land and then decide to splash on into the water. You slip the transmission into neutral. (Because those wheels aren't going to do much for you in the water!) Then you engage the twin propellers in the back and off you go, having happily transformed from a driver to a captain.

The two doors of the Amphicar are double sealed, forming a tight enclosure so that no water can get in. The boat/car has a bilge pump for any water that does happen to make it's way in. Just make sure to check that your drain hole is closed before heading into the water! (We've certainly forgotten to do that a couple of times in our larger boat.)

The Amphicar has all of the necessary maritime safety stuff that a standard boat has, like running lights, the aforementioned bilge pump, a bilge blower fan, etc. 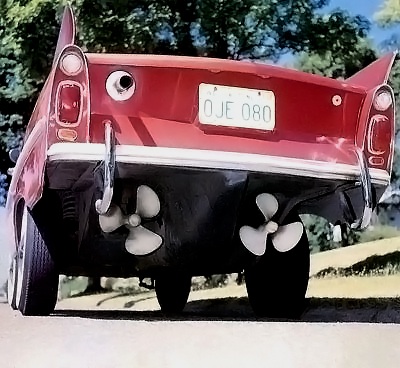 You can purchase an Amphicar for anywhere around $5000, to upwards of $60,000 - depending on the condition. You can buy a fully restored model or one that needs a lot of work, or anywhere in between.

If you do ever purchase an Amphicar, you'll be part of a cool little club. Amphicar owners around the world get together to share their love of this cool little car. In the U.S.A., they get together in Celina, Ohio during the Lake Festival.

Being from that region, you'll see Amphicars all over that week - both on the road and on the lake! They "splash down" at the Hot Water Hole in Celina, to great fanfare. A crowd stands around and watches each Amphicar get a running start and zoom down the boat ramp into the water, splashing kids nearby. Then they putt around in the water.

Now, Amphicars can't handle large waves, so they can't go on oceans or larger lakes. If the waves are too big, they'll splash up over the sides of the car and the bilge pump might not be able to handle it or it could get swamped.

Just make sure if you buy one to keep those door seals well maintained!!!