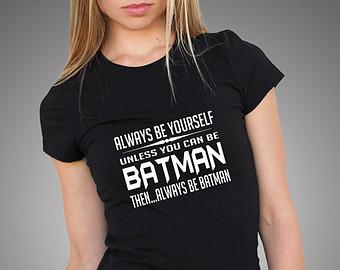 Sage life advice for pretty much anyone, except for maybe Batman or other superheroes.

Obviously Superman or the Green Lanterns don't need to heed this advice, but guys like the Green Arrow or Aquaman would probably be better off being Batman.

But Batman has even bested Superman. He keeps some green kryptonite in his belt juuuuust in case the big guy ever gets out of line or something happens like he gets controlled by LEx Luthor or some other supervillian.

Batman might not be the strongest, fastest or have any superpowers at all - but that's part of what makes him so cool. With money, willpower, brains, and sheer willpower, any one of us COULD be Batman!

Of course, it's a stretch for any of us to be as good as he is, but there's nothing superhuman about Batman. Perhaps that's why he's been so popular over the years.