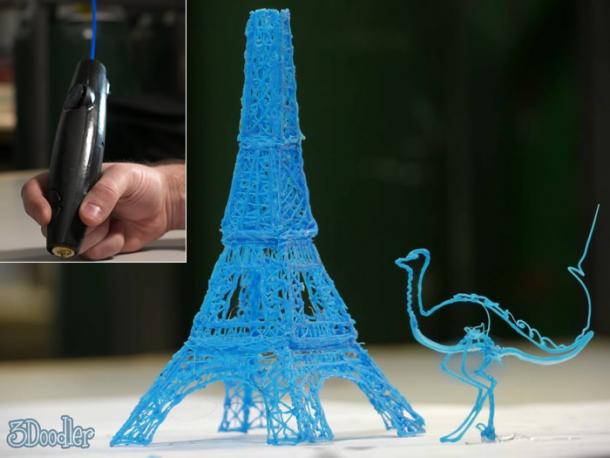 This is a 3D pen that actually LETS YOU DRAW REAL SHAPES IN THE AIR. Make real life 3D shapes and models with this Kickstarter project.

That's right this is a Kickstarter project that hasn't come to life yet, but you can get in on the ground floor and support it now - then you get a 3Doodler 3D pen when they're ready, which is supposed to be  December 2013.
It really looks amazing and the things you can do with it are virtually limitless. You can make art, 3D mockups, jewelry, all sorts of designs, earrings, necklaces, write your name, I mean... it's just insane!
If you're not familiar with 3D printing, it's uses a bioplastic called ABS - a pretty common plastic. The 3D printer heats up the plastic into a semi liquid form and you can then draw with the pen. Most 3Doodler packages come with some plastic but they also plan on letting you buy plastic packages separately - and in different colours.
There's no ink cartridge, you just buy a spool of plastic. And you can buy this plastic from existing sources - it's not a proprietary thing which means it's not going to be super expensive. And sure, at this point 3D printing is pretty new, but the prices keep coming down pretty quickly. By the time 3Doodler is out, the prices will have dropped even more as 3D printing gets more and more common.
If you're interested, there's quite a number of stretch goals. That means that if you get in and buy now, as more people get in it'll unlock more goodies!
While this 3D printing pen is mind-blowingly awesome, bear in mind that it's not a real product at this point. They have most of the work done, have built prototypes, but the company (WobbleWorks, LLC) is raising money at this point through Kickstarter.com in order to wrap th project up and get it to market. You're basically investing in the 3Doodler and get the finished project as a reward for your support - you're not simply buying the product.
That said.... check it out!!!
$75.00
Via kickstarter.com
Tags: 3doodler, 3d printing, 3d pen, kickstarter
Categories: Geeky, Tech