Why Do We Celebrate St. Patrick’s Day?

St. Patrick’s Day is Monday, March 17, 2014. Millions of us around the globe will wear green clothing, sometimes outrageous clothing accented by beads and light and funny hats and sunglasses. Thousands of parades around the USA and the world will happen and revelers will drink untold bajillion gallons of green beer. (Much of it lukewarm and tasteless.) For a day, everyone is Irish and it’s a fun, fun time – at least until the next morning.

But just why in the hell do we celebrate St. Patrick’s Day? Who in the eff was St. Patrick and why does he have a day where we all get drunk in his memory? 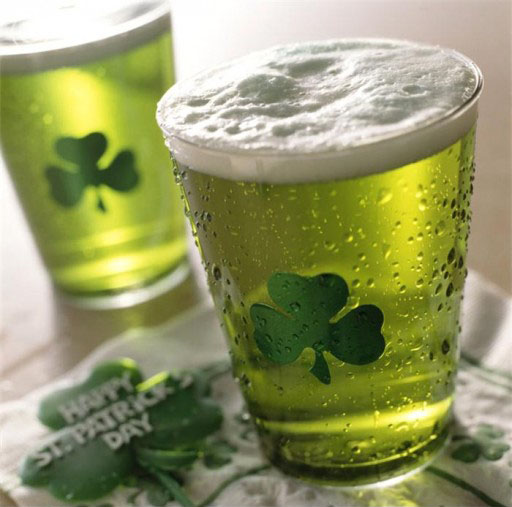 Green beer: the reason for the season?

Well the guy we now know as St. Patrick lived in the 400s (AD) in Britain. He was part of a wealthy, Roman Catholic family with ties to the church, so he grew up as a knowledgeable Christian.

One day when he was 16 he was just hanging out, probably playing video games or whatever kids did back then, and he got abducted by some pillaging Irish dudes. They straight up jacked him and brought him back to Ireland. He was forced to work the fields and tend sheep and otherwise be a slave to these guys for like SIX YEARS.

Eventually he had voices in dreams tell him it was time to move on, to escape these evil bastards and get on home. He attributed these “visions” as the voice of God. (We’d get visions telling us to GTFO too after six years as a slave.)

So he manages to escape on a pirate ship back to Britain, but it isn’t easy. After a while back home in Britain he has another vision, and this time the voice tells him to go back to Ireland, to teach the people there.

See, at this time in Ireland most of the people were a pagan, nature-based religion and knew nothing of Christianity. So good old St. Patty studies and becomes ordained as a Catholic priest and then heads back to Ireland in order to convert people as a missionary.

And the work in Ireland was TOUGH. He fought against the grain the entire time, was beaten by thugs, harassed politically, and even took some shit from his British superiors.

But he kept working at trying to convert the pagans to Christianity. He framed things in their own terms. Like, he revised the cross and superimposed a sun behind it, because the sun was a huge and powerful symbol to the pagans. He used bonfires to celebrate Easter because the Irish honored their Gods with fire. He used things the pagans could latch onto to teach them things and make it more familiar to them – kind of a radical concept back then.

A celtic cross. Like many other celtic crosses that were originally devised by St. Patrick.

St. Patrick has inspired MANY a tattoo. And many of those likely done after drinking a couple green beers on St. Patty’s Day.

St. Patrick used the shamrock to teach the pagans about the Holy Trinity. The three leaves were the Father, the Son and the Holy Spirit. So there’s why we wear the shamrock everywhere today.

Now as for the fact about St. Patrick chasing the snakes out of Ireland, that’s total bull. There are no snakes in Ireland, there never were (in modern times at least). More likely is that the church used the metaphor of St. Patrick driving driving the pagan “snake” out of Ireland by teaching Christianity across the land. 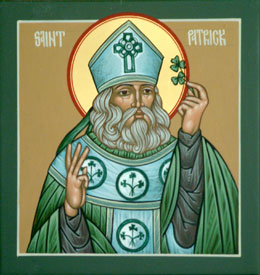 Sadly St. Patrick died in relative obscurity. His work wasn’t recognized until much later, as his legend grew.

He was never actually canonized as a Saint, buuuut that’s kind of a technicality. The church didn’t have a formal method of canonizing until around 1200 AD – they just sort of accepted that someone was a Saint.

The celebration of St. Patrick’s Day didn’t start until the last couple hundred years. In the early 1600’s Saint Patrick’s feast day started and was a day of holy obligation in Ireland.

The thought is that as Irish imigrated to America, they used St. Patrick’s day as a way to hold onto their roots, to celebrate their ethnic identity and come together as one. It wasn’t until 1903 that St. Patrick’s Day became an official public holiday in Ireland.

Of course it has grown and grown, to the point that everyone is Irish for a day. Think about that – is there any other holiday where everyone “becomes” another nationality for the day? Maybe Cinco de Mayo, but it’s more about having some Coronas or Margeritias more than “being Mexican”. Although, it’s similar in that Mexican Americans take pride in their heritage on that day. (Maybe someday in a couple of decades Cinco de Mayo will be bigger than St. Patty’s day!) 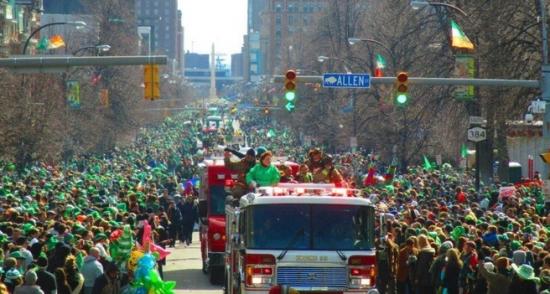 A St. Patrick’s Day parade in Buffalo, NY. Drinking in public is permissible on this day, if not even downright encouraged.

So on St. Patrick’s Day, most of us wear green, get drunk and have fun. Of course, we’ll take any excuse for partying we can get, but how rarely we think about WHY we do things.

The next time you’re taking a swig off a green beer and dancing a jig with some fine Irish lasses, think back to good old St. Patrick, working as a slave and later winning over the hearts and minds of those godless Pagans. There are no more snakes AND there’s cheap green beer everywhere! After downing your fifth red Solo Cup of hooch, you can think to yourself, “Ahhh, I love history and religion, but more importantly, I love beer.”